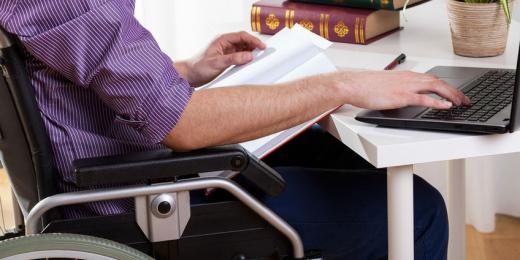 Many UK employment lawyers will welcome the decision of the Court of Appeal in this disability discrimination case, City of York Council v Grosset, which clarifies section 15 of the Equality Act. The decision looks at whether an employer must ‘know’ that an employee’s behaviour was a consequence of that employee’s disability, and that the disability was therefore in the employer’s mind at the time of the unfavourable treatment that amounts to the act of disability discrimination. Its an important decision for employers and employees alike.
Employer’s knowledge of disability
The Equality Act 2010, which consolidated much of the UK’s anti-discrimination legislation, was welcomed by every top employment law firm in the UK. Those specialising in employment law for employees were particularly pleased that the Act introduced section 15 to improve the protections for disabled people following a ruling by the House of Lords in Lewisham London Borough Council v Malcolm [2008] UKHL 43; [2008] 1 AC 1399 which imposed a restrictive interpretation on section 5 of the old Disability Discrimination Act.
The Malcolm case concerned a housing matter but is familiar to most Employment claim solicitors. Mr Malcolm, the tenant, had schizophrenia which caused distortions in his thinking. In the run up to exercising his right to buy his council flat (for which he had a secure tenancy) Mr Malcolm sublet the flat in breach of the tenancy. The council brought proceedings for possession of the flat. Although Mr Malcolm argued that his decision to sublet had been caused by his distortion in thinking, the House of Lords agreed that there was no disability discrimination because Lewisham Borough Council did not know about the disability and would have sought possession from any tenant who had sub-let. The effect of the decision was to render section 5 of the Disability Discrimination Act 1995 relatively toothless and made it harder for employees, and those specialising in employment law for employees, to argue.
Section 15 of the Equality Act is as follows:

(1) A person (A) discriminates against a disabled person (B) if—

(a) A treats B unfavourably because of something arising in consequence of B's disability, and

(b) A cannot show that the treatment is a proportionate means of achieving a legitimate aim.

(2) Subsection (1) does not apply if A shows that A did not know, and could not reasonably have been expected to know, that B had the disability.

Section 15(1)(a) seems relatively straightforward – for there to be disability discrimination, A must treat B unfavourably because of ‘something’ which is a result of B’s disability. The question for the court in Grosset was whether there was an additional condition, that A had to know that the ‘something’ was the result of the disability.

Cystic fibrosis and stress lead to a nightmare
The thought of a school teacher showing a class of 15 years olds an ‘18’ rated horror film is a nightmare for many – and yet it came true for Mr Grosset, Head of English at a secondary school in York. At the end of a stressful examination period, he had intended to show a group of vulnerable pupils a film to support some other learning – and ended up showing ‘Halloween’. In fact, Mr Grosset suffered from cystic fibrosis. Although the school had in the past, made reasonable adjustments that had worked well, an increased workload coupled with a new head who was not aware of Mr Grosset’s condition (which was accepted to be a disability) or the adjustments that were in place to support him, meant that Mr Grosset was finding it increasingly difficult to cope. The stress he was under was so great that it led to a significant drop in his lung function and he was facing the prospect of a lung transplant. Immediately following the day when he showed Halloween, he had to take time off due to his ill health.
Mr Grosset was dismissed for gross misconduct and brought claims for disability discrimination and unfair dismissal in the Employment Tribunal.
Court of Appeal confirms that there is no additional requirement of ‘knowledge’ in s.15(1)(a)
The Employment Tribunal and Employment Appeal Tribunal both upheld the complaint of disability discrimination, and the employer appealed to the Court of Appeal. It argued that the claimant had to show not only that ‘the something’ (in this case, showing the film) arose from the disability, but that the employer also knew and understood that the this was the case. Without this knowledge and understanding, the employer argued that s.15910(a) was not satisfied.
The Court of Appeal rejected this argument and confirmed that the 2 relevant questions to s.15(1)(a) are
1. Whether there was unfavourable treatment by A of B because of ‘something’; and
2. Whether the ‘something’ arises in consequence of the disability
Theirs is no additional requirement of ‘knowledge and understanding’ on the part of A.
S.15 operates to overturn Malcolm
employees and those representing them will be pleased to see that the harsh decision in Malcolm has effectively been overturned, and the Equality Act 2010 achieves the aim of protecting victims of disability discrimination more effectively. Employers will need to consider carefully their approach. If the action/behaviour – the ‘something’ - has arisen because of the disability the unfavourable treatment may well be discriminatory unless it can be justified. It is no longer enough to say that anyone who had behaved in a certain way would have been dismissed (or treated in the less favourable way).
OTS Solicitors have a team of experienced employment law solicitors in London able to handle all aspects of employment law for employers and employees. Whether you need advice and support on a specific issue, or are looking for ongoing training and HR support, we can help. Contact us on 0203 959 9123 today to book an appointment.